You started in the early nineties with experimental music and then shifted towards street theatre. How do these elements merge in your current work?
I began in the early eighties to file sounds, voices and noises with defective and low-quality instrumentation. Then I manipulated and assembled this material with minimal, arrhythmic patterns and played them in concerts, usually in private apartments. Then I felt the need to move this experience towards a wider public audience, I collaborated with theatre and began to experiment awkward kinds of performance in which the audience was involved without even knowing it. In the early nineties I showed my work in the artistic context with ambients crossed by, modified from sound.

Your work with light and sound is paradoxical: the light hides, instead of revealing, the sounds are often barely distinguishable. Maybe in this way of keeping the audience alive and awaken there is much of your former experiences?
An artwork has various layers of perception, and one of this is how the viewer relates to it. In "Keep Out Of Reach" (1992) in the first room there is a sculpture of a light so intense that hides in its inside a writing that should instead illuminate. On the threshold to the second room you found helmets with a reading light that you had to wear before entering the room. In the empty and darkened room the visitors behave in the most different ways: someone was looking for an artwork that did not exist, someone else was looking for a contact with someone else. But since they both wore lights on their forehead, the encounter made them dazzle each other...

Your exhibitions are an opportunity to test the limits of our senses and of our capacity to perceive and communicate. Why do you always ask the viewer an active participation? What are you looking for?
Im not interested in determining or testing perceptual limits, I dont believe there is a public, not even a viewer. Viewing and seeing are discontinuous positions, subject to continuous disturbs and distractions. As Italo Calvino said seeing means to perceive the differences

In your last work Dice non-dice (2005) we find once again light and sound: it is a sculpture suspended in time, a throw of the dice that has not yet ended its path. Where is your work going?
This is a tree-dimensional, sculptural game to play. Two big dice with spotlights and woofers on their sides. They are apparently still, like a still frame documenting one instant of their trajectory.
It is a sculpture that denies itself: Says non-says (word game between italian and english) but it is also a return to the pleasure of the contact with tenuous and mutable things. The slow unwinding of the event has its main characters: seeing, playing and listening. So the audience is again part of the play, becomes other, a moving space. The die is cast, Les jeux sont fait

What about your forthcoming exhibition at Die Schachtel, a new gallery specialized in Sound Art, in Milan?
I can tell you the title: Listen to a sound so intensely that your memory will leave you doubting either if you have listened to that sound or another one or even if you have listened at all
http://nyartsmagazine.com/pages/nyam_document.php?nid=1223&did=2713 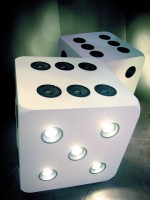